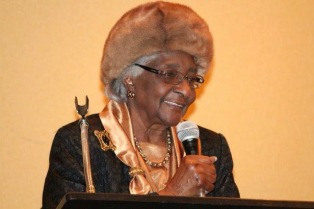 Mother Katie S. Allen is the Jurisdictional Supervisor of Women and District Missionary for the Harrisburg District for the Pennsylvania Commonwealth Ecclesiastical Jurisdiction of the Churches of God in Christ.  She is a dedicated, ardent woman of God and a woman of wisdom who brings a rich portfolio of creative excellence to the Commonwealth.  Mother Allen is conscientious and demonstrates a high degree of loyalty.  She has a warm heart and her kind spirit of giving towards others exemplifies the values that are necessary for leadership.  She also possesses the ability to efficaciously help people to see and reach their potential.  Mother Allen is a prayer warrior and a true example of holiness. Her testimony is “I don’t care what you do to this body; you can’t destroy my soul, because my soul is hidden in Christ Jesus… Yea God!”

Mother Allen accepted Christ as her personal Savior at the precocious age of twelve in the Church of God in Christ in Lloyd, Florida.  In 1946, she moved to Harrisburg, PA., where she met and married the late Brother George Allen. They proudly parented three children, Barbara Allen-Jackson, George E. Allen, Jr. and William S. Allen.  She joined Mt. Zion Church of God in Christ under the leadership of Elder Caesar Bennett.  She has faithfully served at Mt. Zion for over 65 years. Today, she supports and works diligently under the leadership of Pastor Reginald Frison. Mother Allen is obedient to the voice of God.  Her anointing and gift of discernment has impacted many lives.

Mother Allen was appointed and served for 10 years as the Administrative Assistant to the late District Missionary Mother Emma Parker in the Harrisburg District. In August 1996, after Mother Parker transitioned this life, Mother Allen was appointed as the District Missionary.  Her exceptional reputation of being faithful and steadfast afforded her the appoint to the position of secretary for the Women’s Department under the leadership of our Sainted Mother Leonora James.  She served as the secretary for 27 years.

In April 2003, the late Bishop Benjamin J. Ravenel, Sr., the Jurisdictional Prelate of the Pennsylvania Commonwealth Ecclesiastical Jurisdiction appointed Mother Allen and Mother Thelma E. Bady as Regional Assistant Supervisor’s.  Mother Allen’s region covered Harrisburg, Reading, Lancaster, Coatesville and the surrounding areas.  In April 2007, this Saintly Mother was appointed to the position of Supervisor of Women for the Jurisdiction by the Late Bishop Benjamin Ravenel.  In November 2007, at the 100th Annual Holy Convocation of the Church of God In Christ, in Memphis, Tennessee, Mother Katie S. Allen was officially installed as Jurisdictional Supervisor of Women of the Pennsylvania Commonwealth Ecclesiastical Jurisdiction by Mother Willie Mae Rivers, the General Supervisor of Women Emeritus.

As a sojourner of the gospel, Mother Allen’s love for God and compassion for people has given her the vision for creating several departments and committees.  Mother Allen is the Founder and President of the Ways and Means Committee.  This group recognizes “Unsung Heroes” in church work.  Also, she is the Founder of the Harrisburg C.O.G.I.C. Distribution Vision and Outreach Center, a program which provides food, clothing and other essentials items as needed.  In her words, “I’m a working Supervisor, I’m not tired yet!” “Do not tell me to sit down! Do not tell me to rest!”  She lives out her favorite scripture:  Isaiah 40:31, “But they that wait upon the Lord shall renew their strength; they shall mount up with wings as eagles; they shall run and not be weary; and they shall walk and not faint.”  And she inspires with one of her favorite songs: “Saints, don’t stop praying for the Lord is nigh… Don’t stop praying, He will hear your cry…”  Along with her tireless duties in the church, Mother Allen worked for Bell Telephone, now Verizon, for 20+ years.  She retired from Verizon, but continues to work for the Lord.  On January 26, 2018 she earned the distinction of nonagenarian by turning 90 years of age.